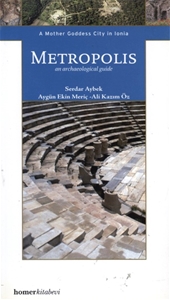 The archaeological guides are written by well known archaeologists with the thought that they might evoke the spirit of these places for those are intersted in remains of Anatolian civilizations. Illıstrated with beauitiful photographs, equipped with helpful plans and drawings, they are essential to travellers to Turkey.

Metropolis is a city of the Mother Goddess in lonia. The classical city of Metropolis is situated 45 km from İzmir and the Aegean coast overlooking the Torbalı plain alongside the İzmir - Aydın motorway. In classical times the communication route was the Cayster River (Küçük Menderes) and Metropolis lay at the mid point between Smyrna and Ephesus. Lying beneath the classical citys is a Byzantine settlement and fort, also used during the Ottoman period. Metropolis lived its golden era during the Late Hekkenistic Period. Altars were erected in honour of Emperor Augustus during Roman Imperial Period. It became a bishopric in the Age of Byzantine Empire. Its people governed the city from its acropolis, worshipped gods, wandered and shopped in its stoa, decided on city in bouleuterion, enjoyed plays in its theatre. Now archaeologists are excavating where Metropolis once built, tracking past civilizations autboring the story of hummanity reaching our days from centuries ago. The site has been excavated for the past 18 years by the Dokuz Eylül Üniversity, İzmir under the guidance of Professor Recep Meriç. From 2007 Dr Serdar Aybek from The University of Trakya has taken over leadership of the excavation.