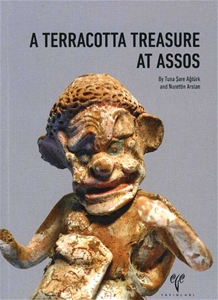 A Terracotta Treasure At Assos

During the summer of 1995 Turkish archaeologists discovered a unique Late Classical tomb in the Western Necropolis of Assos. A modestly designed cist grave, Tomb 4 surprised excavators with the richest cache of grave goods ever found at the ancient city. The 62 well-preserved artifacts, which date from the 4th century BCE, when Aristotle's school of philosophy was active at Assos, consist of terracotta figurines, gold and bronze jewelry, and vases. The variety of the coroplastic group is especially striking. The types include seated female musicians and a poet, an oklasma-dancer, comic actors, goddesses, a horse-rider, a warrior, female mask protomes, miniature furniture, various animals, and a fıgurine vase. The main purpose of this publication is to examine the finds from Tomb 4 and to shed light on characteristics of coroplastic produc-tion and socio-cultural life at Assos during its "Golden Age" through a contextual, typological, and iconographical analysis of the terracotta figurines. The variety of the figurines not only gives clues about the identity of the tomb-owners, but also hints at the many aspects of the "Golden Age" of Assos, such as the fertility cults active in the city, the increasing importance of the theatre, the place of women in socio-religious life, and the commercial and cultural relations of Assos with the neighbouring cities, especially Athens.