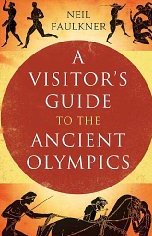 A Visitor's Guide to the Ancient Olympics

What was it like to attend the Olympics in 388 B.C.? Would the experience resemble Olympic festivals as we celebrate them today? This remarkable book transports us back to the heyday of the city-state and classical Greek civilization. It invites us to enter this distant, alien, but still familiar culture and discover what the Greeks did and didn't do during five thrilling days in August 2,400 years ago.

In the Olympic Stadium there were no stands, no shade—and no women allowed. Visitors sat on a grassy bank in the searing heat of midsummer to watch naked athletes compete in footraces, the pentathlon, horse and chariot races, and three combat sports—wrestling, boxing, and pankration, everyone's favorite competition, with virtually no rules and considerable blood and pain. This colorfully illustrated volume offers a complete tour of the Olympic site exactly as athletes and spectators found it. The book evokes the sights, sounds, and smells of the crowded encampment; introduces the various attendees (from champions and charlatans to aristocrats and prostitutes); and explains the numerous exotic religious rituals. Uniquely detailed and precise, this guide offers readers an unparalleled opportunity to travel in time, back to the excitement of ancient Olympia.