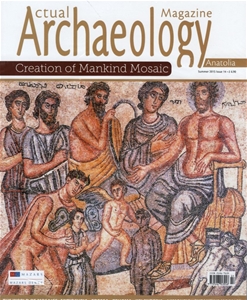 The Colorful World of Mosaics Archaeological science studies material remains and carries out technical and stylistic analyses on these remains. Various identifications are made during this scientific process. For instance, the clay content or the firing degree of a ceramic fragment can be determined. The ratios of the metal contents or the production period of a coin can be determined. However, although archaeologists work meticulously, like detectives, this process gives only a few clues about the life of the individual who produced that ceramic or coin. In the background of these remains or finds are hidden the lives of individuals from every walk of life, such as architects, slaves, religious functionaries, children, and soldiers, who had a role in the social life of the period. At this point, inscriptions and descriptions come to the scientist’s rescue for analyzing the soul of the ancient period. Mosaics are both an aesthetic element decorating a space and a structural element providing insulation. However, mosaics are also among the most important data providing information about the daily life of the period when they were made. The issue you hold in your hand will take you on a journey that explores the tale of the development of mosaics, starting from the earliest examples, the small terracotta cones which decorated the surfaces of palace walls at the ancient Sumerian city of Uruk, and reaching the most elaborate decorations of Byzantine culture. During this journey, you will discover the development of mosaic techniques, workshops, materials, and craftsmen, but you will also touch the soul of the ancient world, through the stories represented on the mosaics. You will be a guest in the dining room of a Roman villa at Zeugma, Edessa or Antiocheia, where you will attend a dinner party or have a chance to meet one of the ancient family members. You will be a witness to Alexander the Great’s victory, which led him to be the world’s conqueror. You will be a participant in the sports competitions in the gymnasium at Akmoneia. You will be a visitor to the Kelenderis harbor. You will see the most beautiful and elaborate examples of mosaic art, as you turn the pages and walk through the aisles of Byzantine churches. You will dive into the amazing world of mythology, symbolism and personification and you will begin to look at mosaics from a different point of view. The small, colored stones, which used to decorate ancient people’s houses, religious and public spaces –in other words, their worlds--begin to speak and share their stories with us. The issue you hold in your hand tells the unique story of the development and the wealth of mosaics, by exploring different periods and cultures. Have a nice read!