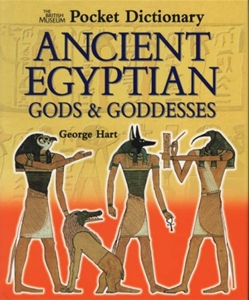 A handy reference guide to the rich pantheon of ancient Egyptian gods and goddesses. This pocket dictionary highlights thirty-five major gods and goddesses and shows how they function in family groupings. Readers can find deities like Atum and Ptah who feature in myths explaining the creation of the universe. They can journey across the sky with the great sun-god Ra-Horakhty and his cohorts and enter the underworld of Osiris. Powerful goddesses such as Isis, Hathor and the ferocious lioness-headed Sekhmet are featured, as are the deities who protected the pharaoh, and those who were responsible for mummification and funerary rituals. All the entries are fully cross-referred and an A-Z contents list enables the reader to find easily a particular god or goddess. Each one is illustrated with colour photographs of paintings, papyri and sculptures depicting the deity and the hieroglyphs of his or her name. The appearance, attributes, roles and responsibilities of each god and goddess are briefly and clearly described.