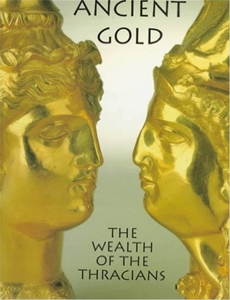 Ancient Gold: The Wealth of the Thracians

Published to accompany an exhibition at six US museums, starting at the Saint Louis Museum in February 1998, this is a study of the remarkable artistic accomplishments of the Thracians, a people who lived to the north of Greece in ancient times. In the "Iliad", Homer described the Thracians as formidable enemies of the Greeks in the Trojan War, and their mountainous country gave birth to legendary poets such as Orpheus. But the Thracians had no written language, and until recently little was known about this enigmatic people. During the last three decades, however, newly discovered archaeological sites have been excavated and studied to reveal the Thracians as a people of extraordinary sophistication. Their metalwork, in particular, which included gold and silver jewellery, bridle ornaments, vases and vessels, was of great beauty and of the highest quality. The book's authors, all specialists in various aspects of Thracian studies, provide commentaries on the objects illustrated. Using a wealth of evidence from ancient Greek and Roman accounts, as well as linguistic, archaeological and ethnographic sources, they present a picture of life in ancient Thrace.