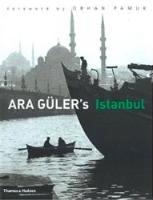 Ara Güler’s Istanbul is a unique record of daily life in the cultural capital of Turkey from the 1940s to the 1980s, captured by the award-winning photographer and accompanied by an evocative foreword by Orhan Pamuk, the first Turkish recipient of the Nobel Prize in Literature.
As the crossroads between Europe and Asia, Istanbul has lived through several empires and has a character that is as many layered as its history – something that Güler’s photographs convey with great sensitivity. In these remarkable black-and-white images, the city’s melancholy aesthetic oscillates between tradition and modernity.

Both writer and photographer were born in Istanbul, and each in his youth held the ambition of becoming a painter. Here, each in his own way paints a picture of his home town and captures its very soul.

Ara Güler is one of Turkey’s – indeed the world’s – greatest photographers. The Nobel Prize-winning Orhan Pamuk is Turkey’s best-known writer.