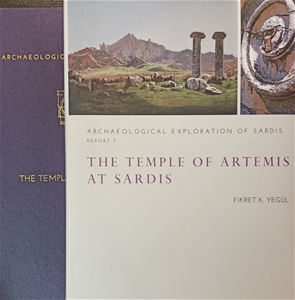 The Temple of Artemis at Sardis, one of the largest Greek temples in the world, is documented in detail in this lavishly illustrated two-volume monograph by architectural historianFikret K. Yegül. Begun in the century after the death of Alexander the Great, this delightful and complex building has been admired by travelers, depicted by artists and architects, and studied by scholars for hundreds of years. Yegül provides a wide-ranging overview of the building, treating such topics as early travelers, excavation history, inscriptions, construction techniques, the colossal Roman imperial portraits from the temple cella, religion and cult, and comparisons to other temples and buildings throughout Asia Minor.

Yegül’s block-by-block description of the extant elements of the building, accompanied by hundreds of drawings and photographs, elucidates the two primary phases in the temple’s design and construction, which date to the Hellenistic and the Roman imperial periods. All elements of the building are illustrated in their recently conserved state, with centuries-old discoloration now removed to reveal the original marble.

Description of the Building: The Physical Remains