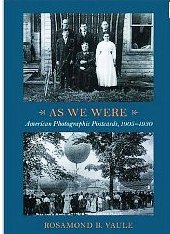 Today, no one seriously doubts the value, both aesthetic and historic, of the ubiquitous American photographic postcard. This was the medium that really brought photography to the masses; these cards were affordable, they were topical, and they could be sent for a penny anywhere in the country. The variety of imagery, much of it developed anonymously in small studios, much of it taken by inspired amateurs (these were the days when anyone could, and many folks did, own a camera) displays America in all its variety and vitality.

Most postcards were mass produced and printed in ink by the collotype or halftone process. But a few were original photographic prints, exposed directly from glass plates or film negatives. Known as "real photos" these were real photographs, aristocrats of the genre and spectacular examples of vernacular photography.