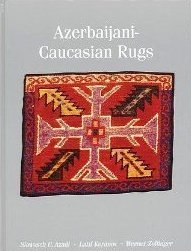 This books is an updated and translated version of the breakthrough research by the legendary Prof. Latif Karimov, who published his first tome (of the set of three) back in early 1960's. Dr. Karimov had an extraordinary life story - being originally from the Karabakh region of Azerbaijan, he also worked in the carpet-weaving industry in Iran, and thus was exposed from early age to all types of Azerbaijani carpets made by Azerbaijani Turks in Azerbaijan and throughout Caucasus, as well as Azerbaijani Turks in Iran (known as "Turkbaf"). According to his research, which he first publicized at a conference in London in the 1970's, no less than 90% of all so-called "Caucasian" carpets are actually Azerbaijani. This is easily proven by even statistics from Russian Empire, which aside from religion and ethnicity of its subjects, also counted their profession, and the number of carpet-makers in Azerbaijani-dominated ("Tatar"-dominated) regions was large, while in regions with Armenians or Georgians in majority, very low or nonexistent.