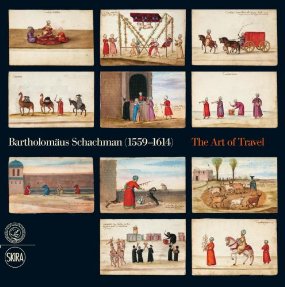 A detailed account of one of Bartholomäus Schachman’s most important journeys across the Ottoman Empire, from 1588 to 1589, shown through a never-before-published selection of 100 watercolor miniatures. Traveler and explorer, art patron and collector, benefactor and connoisseur, politician and mayor, Bartholomäus Schachman lived in a time of major political and religious changes in Europe, when both religious and secular arts flourished under the great expansion of the Ottoman Empire. Schachman’s journey through the Ottoman Empire lasted only two years, from 1588 to 1589, and his album, as shown through the watercolor miniatures he collected during this journey, became one of the greatest travelogues of the sixteenth century.