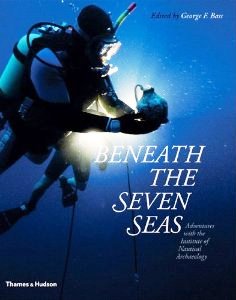 Beneath the Seven Seas

Firsthand accounts from around the world of more than forty of the most important shipwreck and sunken-city projects ever undertaken.

From the Pacific to the Mediterranean, from the Caribbean to the Red Sea, from northern Europe and the northern United States to the Indian Ocean, archaeologists vividly describe shipwrecks from centuries past, from the oldest and deepest ever excavated to the remains of battles in both the European and Pacific theaters of World War II.

Readers will dive nearly 200 feet with Cemal Pulak on a royal ship that sank over 3,300 years ago off the Aegean coast of Turkey, and explore with Donny Hamilton the streets and houses of the richest English colony in the New World, the infamous pirate stronghold of Port Royal, Jamaica, swallowed by the sea in 1692. They will accompany famed undersea explorer Robert Ballard, discoverer of the Titanic, as he and Cheryl Ward search for shipwrecks in the deep, oxygen-free waters of the Black Sea. They will wade with archaeologist Fred Hocker through mud along the bank of a South Carolina river, and then sail through a gale with Susan Womer Katzev on a full-scale replica of the best-preserved ancient Greek ship yet raised from the depths of the Mediterranean.

The book describes the tragic loss, within sight of their loved ones, of seamen returning home to Portugal in 1606, at the end of a two-year voyage to the East on the Nossa Senhora dos Martires, and then describes the fate of the crew of another Portuguese ship, the Santo Antonio de Tanna, which sank off Mombasa, Kenya, while trying to lift the siege of Fort Jesus by Omani Arabs in 1697. It describes the foods, games, weapons, tools, and grooming implements on a ship sailed by Bulgarian merchants around AD 1025, carrying as cargo the largest known collections of medieval Islamic glass and glazed pottery. 350 color illustrations.