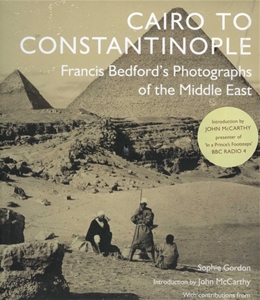 Cairo to Constantinople: Francis Bedford's Photographs of the Middle East

In the spring of 1862, Queen Victoria commissioned the leading British photographer Francis Bedford to accompany her son and heir, the future King Edward VII, on an ambitious journey across the Middle East. This beautifully illustrated book traces their tour throughout Egypt, Palestine, Turkey, and Greece alongside excerpts from Prince Edward’s diary and other newly discovered archival material, published here for the first time.

Over the course of several months, Bedford produced more than two hundred negatives, including images of architecture and stunning landscapes, from a breathtaking view of the Garden of Gethsemane to shots of the Great Pyramid and the Sphinx. He was the first Christian granted permission to photograph sacred sites in Jerusalem. Bedford also captured many photographs of the people he encountered on the tour, both locals and members of the royal party.

Cairo to Constantinople is the first book to focus on the photographs taken during Prince Edward’s travels in the Middle East. Taken during a time of great change in the area, these extraordinary photographs will fascinate anyone with an interest in the history of the Middle East or in photography’s role in documenting civilization.