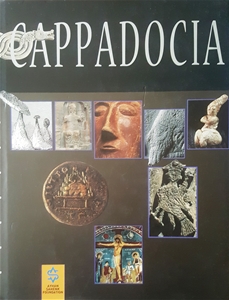 In the pages of Cappadocia book, the region unfolds before our eyes: the transition from a nomadic to a settled way of life 10000 years ago, the first villages, tribes and clans, city states, trading colonies, kingdoms, states and empires; the way each has evolved, developed, risen to its heights and then declined and dispersed in the eternal rhythm of history. We see the effect of the ecological systems, climate and geography on human history and reciprocally the way in which human intelligence has shaped the natural environment and lent it universal dimensions.

From the pre-pottery ages of prehistory to the early Christian era and subsequently through the Byzantine, Seljuk and Ottoman eras up to the Turkish Republic, the events in this chain, their interaction with one another and the way each culture has influenced its successors are all examined and studied as part of an integral whole. As the pages turn, we retrace man's journey through time from deep in the prehistoric ages. Chronological examination of the civilizations which arose on this soil draws a picture of Turkey's cultural history. We make the acquaintance of the people who have participated in the cultural mosaic of Anatolia over the millennia, their names, their political and administrative systems, their wars and alliances, their destinies, their societies and ways of life.

In this volcanic region whose distinctive landscape has gradually formed over millions of years, many seeds of man's development have been sown in the fields of construction and engineering, agriculture, metal working, communications, political organizations and trade. The first Caravan routes were established here and later the Silk Road and metals such as gold and silver were used as currency in trade with other lands. The first operation on the brain and first autopsy were performed here.

Ancient Cappadocia encompassed the present Turkish provinces of Kırşehir, Nevşehir, Aksaray, Nigde, Kayseri and Malatya, the eastern part of Ankara, the southern parts of Yozgat and Sivas and the northern part of Adana. The area referred to as Cappadocia today, which is a major tourism destination and is chosen in 1985 by international authorities as a part of the 'World's Natural and Cultural Heritage', is a smaller region covering Aksaray, Kayseri, Nevşehir and Nigde.