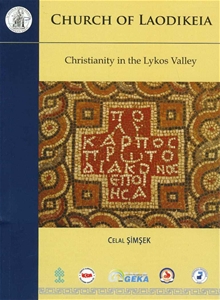 Church Of Laodikeia Chistianity in the Lykos Valley

Since 2003 excavations and restoration work at Laodikeia on the Lykos have been Undertaken by the author on behalf of the Ministry of Culture and Tourism and Pamukkale University. The work conducted has shown that the history of Laodikeia, which is located within the borders of Eskihisar, Goncali and Bozburun neighbourhoods (former villages) and surrounded by rivers, namely Asopos, Kadmos, and Lykos, on three sides 6 km the north of Denizli, goes back to 5500s BC, not to the third century BC as was formerly thought. The city experienced numerous earthquakes, some very devastating, but always rebuilt; however, the earthquake in the reign of Focas (r. 602-610) razed her to the ground; the site was abandoned and the survivors settled at Kaleig of Denizli and Hisarkoy on the northern foots of Salbakos (Babadag). The city of Laodikeia had her high times during the Roman Imperial period and Late Antiquity when Christianity spread from the fourth to the sixth century. As the city was one of the first Seven Churches she became a metropolitan see quite early. Evidence uncovered indicates that the lifestyle of the city changed with Christianity and the city became a venue of pilgrimage as of the fourth century. With the spread of churches as architectural monuments across the city it is observed that some rooms in the houses with peristyle courts were converted to oratories building up a tradition of family chapels. This short work first tells briefly about the spread of Christianity in the region and churches in the city. This book's main focus is the Church of Laodikeia uncovered in 2010; therefore, you will find detailed information on its architecture, fountains, pastophoria, synthronon, ambo, bema, altar, baptistery and the corridor leading to it, frescoes, opus sectile flooring, and mosaics and the dating based on excavation finds. Furthermore, the protective roof project and the steel-and-glass catwalk for visitors are presented comprehensively.