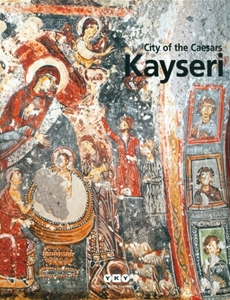 City of the Caesars Kayseri

City of the Caesars Kayseri is devoted to the city of Kayseri, described by Evliyâ Çelebi as the “city of the caesars”. This account is not confined to the city’s excellent climate, which Evliyâ attributes to “the gentle breezes that blow constantly throughout summer and autumn, since the city lies beneath Mount Erciyes in the centre of Anatolia, open to the north and west but closed to the pernicious southwesterly winds”, and to the marvellous cured beef and garlic sausage “sent as gifts to rulers”, but seeks to embrace its entire legacy and culture in a broad sweep extending from antiquity to the Seljuks, Ottomans and the present day, including its monumental and vernacular architecture, Mount Erciyes, stuffed dumplings and music.
In City of the Caesars Kayseri the reader is taken on a step by step journey tracing the past of the city and province, from Erkilet to Tavlusun, Germir, Talas, Soğanlı and Gesi, recording all its memorable aspects not just in writing but in lavish illustrations.
Fikri Kulakoğlu has written about Kültepe/Kanesh, Anatolia’s ancient international trading centre; Nilay Çorağan Karakaya about Kayseri’s Roman and Byzantine monuments; Mustafa Çayırdağ about the Seljuk period; Şeyda Güngör Açıkgöz about the Ottoman period; and Vacit İmamoğlu about daily life and vernacular architecture.
This is the latest in the series of city monographs published by Yapı Kredi Publications, following on from İstanbul, İzmir, Ankara, Bursa, Trabzon, Edirne, Diyarbakır, Adana, Konya, Urfa, Balıkesir, Mersin, Mardin, Kars, Antep, Kastamonu, Maraş, Denizli and Çanakkale. City of the Caesars Kayseri is edited by Filiz Özdem and illustrated with photographs by Hakan Ezilmez.