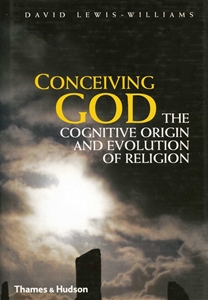 Conceiving God - The Cognitive Origin and Evolution of Religion

Polemical, insightful and thought-provoking, Conceiving God is essential reading for all those interested in the origins and roles of science and religion in contemporary society.
Recent years have seen a growing tension between religion and science as more and more people have asked themselves a fundamental question: is there a supernatural realm that intervenes in daily life? To many it certainly feels so – but what if the religious impulse has another, rational, explanation?
David Lewis-Williams explores how science developed within the cocoon of religion and then shows how the natural functioning of the human brain creates experiences that can lead to belief in a supernatural realm.
Such belief gives rise to creeds, a development examined here in the light of critical episodes in world history, from rivalries between Platonists and Aristotelians to the discoveries of Charles Darwin.
Archaeology reveals activities one can label religious many tens of thousands of years ago and the author shows that mental imagery can be detected in widely separated religious communities such as Hildegard of Bingen’s in medieval Europe or the San hunters of southern Africa.