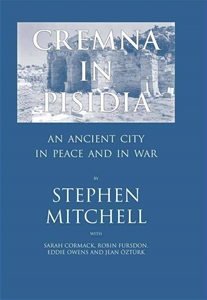 Cremna in Pisidia: An Ancient City in Peace and War

Cremna, a ruined city of southern Turkey, has one of the most spectacular sites in Asia Minor, high in the Taurus mountains. For a long time a stronghold of hellenised Pisidians, Cremna was refounded as a veteran colony by the emperor Augustus. From the age of Hadrian until the early third century AD the colony enjoyed a boom in public buildings, whose remains still adorn the site. Disaster struck in the late third century when Cremna became a centre for a regional insurrection against Roman rule. Roman forces staged a major siege of the city, and recaptured it in AD 278. A bishopric in Late Antiquity, Cremna was abandoned in the sixth or seventh century. This book gives a detailed reconstruction of Cremna's life and history, based on an intensive survey of the archaeological remains between 1985 and 1987. There is a lively account of the survey itself. The book also traces the story of the rediscovery of the site in 1833 and the contribution of early travellers and archaeologists. There is a full study of the public building programme of Cremna from the first century BC to the third century AD; of the aqueduct, water supply and domestic housing; and of the church building in Late Antiquity. The highlight of the archaeological survey was the discovery of numerous remains of the Roman siege of AD 278. The siege of Cremna demonstrates classical techniques of Roman siege warfare, which hitherto were best known from Josephus' account of the Jewish Revolt in AD 66-73. Cremna in Pisidia is written in a style accessible to general readers as well as to specialists. It is not only a definitive account of an important city of the Roman East. It is also a case-study exploring many of the common characteristics of civic life in the Roman world.