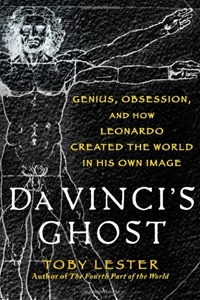 Da Vinci's Ghost: Genius, Obsession, and How Leonardo Created the World in His Own Image

This is the story of Vitruvian Man: Leonardo da Vincis famous drawing of a man in a circle and a square. Deployed today to celebrate subjects as various as the nature of genius, the beauty of the human form, and the universality of the human spirit, the figure appears on everything from coffee cups and T-shirts to book covers and corporate logos. In short, it has become the worlds most famous cultural icon, yet almost nobody knows anything about it.  Leonardo didnt summon Vitruvian Man out of thin air. He was playing with the idea, set down by the Roman architect Vitruvius, that the human body could be made to fit inside a circle, long associated with the divine, and a square, related to the earthly and secular. To place a man inside those shapes was therefore to imply that the human body was the world in miniature. This idea, known as the theory of the microcosm, was the engine that had powered Western religious and scientific thought for centuries, and Leonardo hitched himself to it in no uncertain terms. Yet starting in the 1480s he set out to do something unprecedented. If the design of the body truly did reflect that of the cosmos, he reasoned, then by studying its proportions and anatomy more thoroughly than had ever been done beforeby peering deep into both body and soulhe might broaden the scope of his art to include the broadest of metaphysical horizons. He might, in other words, obtain an almost godlike perspective on the makeup of the world as a whole.  Vitruvian Man gives that exhilarating idea visual expression. In telling its story, Toby Lester weaves together a century-spanning saga of people and ideas. Assembled here is an eclectic cast of fascinating characters: the architect Vitruvius; the emperor Caesar Augustus and his body of empire; early Christian and Muslim thinkers; the visionary mystic Hildegard of Bingen; the book-hunter Poggio Bracciolini; the famous dome-builder Filippo Brunelleschi; Renaissance anatomists, architects, art theorists, doctors, and military engineers; and, of course, in the starring role, Leonardo himselfwhose ghost Lester resurrects in the surprisingly unfamiliar context of his own times.  Da Vincis Ghost is written with the same narrative flair and intellectual sweep as Lesters award-winning first book, the almost unbearably thrilling (Simon Winchester) Fourth Part of the World. Like Vitruvian Man itself, the book captures a pivotal time in the history of Western thought when the Middle Ages was giving way to the Renaissance, when art and science and philosophy all seemed to be converging as one, and when it seemed just possible, at least to Leonardo da Vinci, that a single human being might embodyand even understandthe nature of everything.