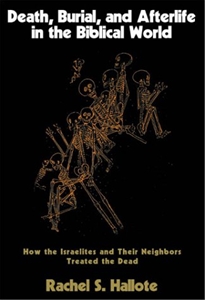 Death, Burial, and Afterlife in the Biblical World: How the Israelites and Their Neighbors Treated the Dead

While the religion of the Bible has long fascinated readers and scholars, the Israelite attitude toward death remains clouded in mystery even though certain mortuary customs have been passed intact through the ages into modern Judaism. The inherently conservative nature of burial practices and related beliefs explains why, despite being vilified by kings, a Cult of the Dead survived for centuries among the common people. Rachel Hallote's fascinating book examines the archaeological, literary, and artistic evidence for the burial practices of biblical times, their antecedents and successors. Ms. Hallote traces Judaic attitudes toward the dead across the centuries, as burial practices were transformed by the Jews encounter with Persia, Greece, and Rome, and their evolution into the practices of modern Judaism and Christianity. She carries the story forward to the present, with its complex interplay of religious, political, and social beliefs that characterize Western attitudes toward death, burial, and afterlife. While Israelites and early Jews would regularly tamper with their graves, pushing skeletons aside and collecting bones, such rituals are now regarded as desecration—proving that even death can be politicized.