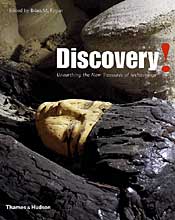 From cave art, royal tombs and mummies to lost cities, ancient scripts and DNA – the most exciting, spectacular and astonishing finds made by archaeologists around the world in the last 15 years, recounted by the discoverers themselves.
International in scope and totally authoritative, the book is illustrated throughout with spectacular photographs, many taken at the very moment of discovery. Contributors include famous Egyptologists such as Zahi Hawass, Kent Weeks and Alain Zivie; pioneering underwater explorers, such as Franck Goddio and many other leading excavators and scientists.
Here are revelations about the pyramids of Giza, a just-discovered royal tomb in the Valley of the Kings and gold-filled burials of Assyrian queens atNimrud, Iraq.
Italy’s Ice Man and spectacular Inca mummies from high in the Andes bring us face to face with people from the past, while stunning wall paintings from Guatemala revolutionize our knowledge of the ancient Maya, and Greek sculptures and Roman mosaics open our eyes anew to Classical art.
Many recent discoveries have been made through the microscope and in the laboratory, and we see how Neanderthals are being reconstructed from their DNA and how medical science is revolutionizing our knowledge of pharaohs and commoners.