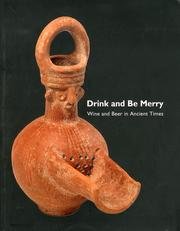 Drink and Be Merry: Wine and Beer in Ancient Times

This book is devoted to the central role of wine and beer on our lives - in religious rites, in festivities, and in everyday life. Although this topic has been examined previously from many different perspectives and in many formats, the particular effort here has been to trace the development of wine and beer from the dawn of civilization in the 4th millennium BCE until the spread of Islam in the 7th century CE and the consequent sharp decline in the consumption of alcoholic beverages. The particular focus is on the origins and history of wine and beer in the land of Israel and in the diverse cultures neighboring the Holy Land. The land of Israel in ancient times played a central role in the production, rituals, and customs of the age old traditions of wine and beer, and the archaelogy of the Holy Land and its neighbors has left us a richly illustrated history of this subject.