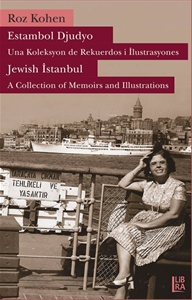 Jewish İstanbul is about the folkloric culture of its Jews and their language that survived over five centuries within the perimeters of the multicultural city of İstanbul, throughout the reign of the Ottoman Empire into the 20th century.

It is about the journey of Judeo-Spanish, the language brought to the Ottoman Lands by the Jews expelled from Spain and Portugal following the Inquisition and their expulsion in 1492.

The collection of childhood memoirs, originally written in Judeo-Spanish pay homage to this endangered language that was last transmitted to the Jewish baby boomers of İstanbul, while the life of the 1950s and 1960s still carried remnants of this unique culture with long history. The English translation is for the future generations to explore the language and the folklore of the Jewish İstanbul as it was once experienced by the multilingual and multicultural Jewish children of Istanbul.