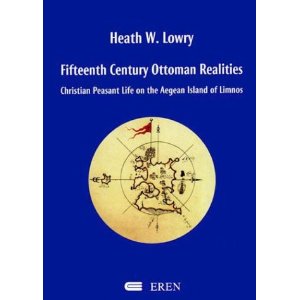 This work examines the manner in which the Ottomans established control, in the fourteenth and fifteenth century, over a largely Orthodox Christian population in the Balkans and Aegean basin. It argues that their success in ruling the multi-ethnic, multi-confessional state thus created was due less to force of numbers than it was to their granting a wide variety of concessions and privileges to their subjects.

This policy, known as istimâlet, or good will and accommodation, stemmed, according to Lowry, from a combination of factors including a severe shortage of trained manpower to administer their ever-growing polity and an understanding, from a remarkably early period, that the fruits of conquest (booty and slaves) were no substitute for the steady flow of income (tax revenues) which could be obtained from a population whose support they enjoyed.

Via a detailed examination of two Ottoman tax registers (tahrir defters) for the Aegean island of Limnos, compiled in the late-fifteenth and early-sixteenth century (1490 and 1519) , which he compares with surviving Byzantine monastic documents for the island, and accounts by travelers, Lowry illustrates the manner in which the Ottoman conquests of the preceding two hundred years had been facilitated by the application of the policy of good will and accommodation.

This book provides the reader a fascinating behind the scenes glimpse into how the early Ottomans managed to create a world empire primarily among peoples whose languages, religions and cultures were all equally foreign to them.