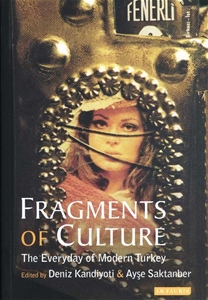 Fragments of Culture The Everyday of Modern Turkey

Fragments of Cultureexplores the evolving modern daily life of Turkey. Through analyses of language, folklore, film, satirical humor, the symbolism of Islamic political mobilization, and the shifting identities of diasporic communities in Turkey and Europe, this book provides a fresh and corrective perspective to the often-skewed perceptions of Turkish culture engendered by conventional western critiques. In this volume, some of the most innovative scholars of post 1980s Turkey address the complex ways that suburbanization and the growth of a globalized middle class have altered gender and class relations, and how Turkish society is being shaped and redefined through consumption. They also explore the increasingly polarized cultural politics between secularists and Islamists, and the ways that previously repressed Islamic elements have reemerged to complicate the idea of an "authentic" Turkish identity. Contributors examine a range of issues from the adjustments to religious identity as the Islamic veil becomes marketed as a fashion item, to the media's increased attention in Turkish transsexual lifestyle, to the role of folk dance as a ritualized part of public life. Fragments of Cultureshows how attention to the minutiae of daily life can successfully unravel the complexities of a shifting society. This book makes a significant contribution to both modern Turkish studies and the scholarship on cross-cultural perspectives in Middle Eastern studies.