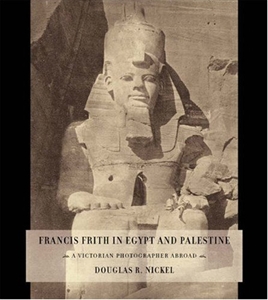 Francis Frith in Egypt and Palestine: A Victorian Photographer Abroad

In 1856, the English photographer Francis Frith set out on the first of three tours of Egypt and the Holy Lands. Traveling up the Nile and then on to the Sinai, Palestine, Syria, and Lebanon, Frith systematically crafted exquisite pictures of ruins, landscapes, and legendary sites. He then published his views in England and America in a variety of formats, becoming something of a celebrity in photographic circles. This book, the first to place Frith's Egyptian and Levantine images in cultural context, reveals the distinct meanings these ostensibly "topographic" pictures held for the photographer and his Victorian audience.

A Quaker by birth and an entrepreneur by nature, Frith brought to his photographic projects a sense of mission: to revive and confirm the stories of the Bible, while offering the region to armchair travelers as a seamless Oriental milieu of Romantic reverie.Francis Frith in Egypt and Palestinenarrates the political, intellectual, and social concerns that make Frith representative of England's encounter with the East in the nineteenth century. Historian of photography Douglas R. Nickel brings a sophisticated interdisciplinary approach to bear on the subject in order to expose the complexity of Frith's image-making, setting the photographs against a Victorian backdrop of religious debate, imperialist thought, Romantic philosophy, and Pre-Raphaelite aesthetics.