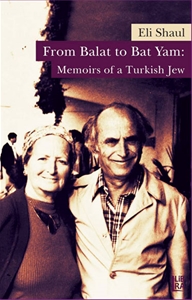 From Balat to Bat Yam: Memoirs of a Turkish Jew

Eli Shaul (1916-2004) was a Turkish Jew. After spending his childhood in the colorful Balat neighborhood, he received a superb education at the prestigious İstanbul Erkek Lisesi (Istanbul Men’s High School), the University of Istanbul, and the Reserve Officers Training School in Ankara. While still in high school, he began keeping a diary, which he continued during his college years and the time he spent serving as an army dentist in eastern Turkey. Those diaries, contained in this book, provide rare insights into what life was like for minorities—and particularly for Jews—in Turkey during the nineteen thirties and forties. Atatürk’s Republic, which most of them ardently supported, had raised their hopes of at last being accepted as fully equal Turkish citizens in every way, but those hopes were cruelly dashed when discrimination and anti-Semitism continued, and even worsened, especially after Atatürk’s death in 1938. Not surprisingly, most of Turkey’s Jews immigrated to Israel after it won its independence in 1948. That exodus provoked harsh criticism of the Jews in the Turkish press, and the Turkish Jews founded their own newspapers and magazines to respond to those attacks. Shaul was one of the first contributors to Turkey’s fledgling Jewish press, and some of his most important articles are included in this volume. He himself moved to Israel in 1950 but continued to write articles for Turkish Jewish publications throughout his life and also authored a book on the folklore of the Turkish Jews. From Balat to Bat Yam is a testament to Eli Shaul’s deeply felt patriotism, which consisted not only of love for his native Turkey but insistence that she treat all her citizens as equals.