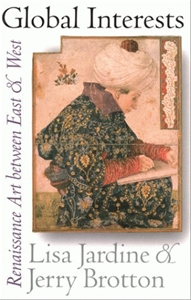 In this groundbreaking, highly provocative examination of the Renaissance, Jerry Brotton and Lisa Jardine raise questions about the formation of cultural identity in Western Europe. Through an analysis of the circulation of art and luxury objects, the authors challenge the view that Renaissance culture defined itself in large part against an exotic, dangerous, always marginal East. Featuring more than seventy illustrations, including many in color and some published for the first time, their book provides fascinating insights into the works of Pisanello, Leonardo, Dürer, Holbein, and Titian.

Global Interests explores the trade in portrait medals, tapestries, and equestrian art, all items that Brotton and Jardine demonstrate were markers of power and influence in both the West and the East. The authors reveal that this trade represented a remarkably equal exchange between Renaissance Europe and the Ottoman East. Their findings lead them to argue that the East, and in particular the Ottoman Empire of Mehmet the Conqueror and Suleiman the Magnificent, was not the antithetical "other" to the emergence of a Western European identity in the sixteenth century. Instead, Paris, Venice, and London were linked with Istanbul and the East through networks of shared political and commercial interests. By showing that the traditional view of Renaissance culture is misleading, the authors offer a more truly global understanding of historical experience.