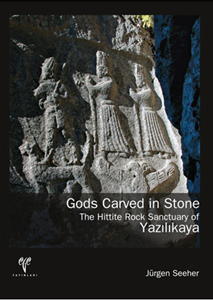 Gods Carved in Stone The Hittite Rock Sanctuary Of Yazilıkaya

The rock sanctuary of Yazılıkaya is one of the most important ritual sites of the Late Bronze Age in Turkey. Its walls are decorated with unique rock-cut reliefs: over ninety male and female deities, animals and mythical beings – more than half of all known Hittite reliefs. The sanctuary once lay on the outskirts of Hattuša, capital of the Hittite Empire, in central Anatolia. The German Archaeological Institute has been excavating here since 1931 and the rock sanctuary of Yazılıkaya has been thoroughly investigated in the process. While scientific literature is plentiful, what is lacking is a “complete Yazılıkaya”: a comprehensively illustrated publication in English intended both for experts and the broader reading public. This book is intended to fill that gap. It offers the reader a virtual tour of the sanctuary and can also serve as a guidebook for visitors to the site. At the same time it summarizes the results of earlier excavations as well as the latest research. Lavishly illustrated with spectacular new photographs of the rock massif, it contains a detailed description of the rock chambers with the reliefs and the accompanying temple buildings. This section is followed by chapters reconstructing the history of the sanctuary and discussing its still mysterious function. Other chapters focus on the Hittites and their capital city, the discovery of the site and its research history and much more besides – with the aim of bringing the ancient monument vividly to life before the reader‘s eyes.