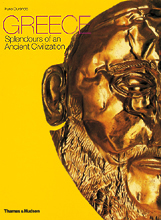 Greece Splendours of an Ancient Civilization

This superb overview of the extraordinary riches of Greek art encompasses every era from the abstract purity of the Cycladic figurines and the perfection of the Classical period to the ‘baroque’ of the Hellenistic era.Almost 400 stunning colour photographs richly display the best of the architecture, paintings, sculptures and brilliantly sophisticated pottery and metalwork of Ancient Greece.

The compelling and wide-ranging text begins in the Bronze Age with Minoan Crete, and proceeds through the glories of 5th-century Athens and the birth of democracy, to the feats of Alexander the Great and ultimately to Greece’s conquest by Rome.

Essential aspects of Greek culture are examined, including architecture, religion, theatre, sport and warfare. Completing the volume is a spectacular itinerary that takes in the most beautiful cities of ancient Greece and its colonies, including Asia Minor and southern Italy. Descriptions are brought to life and cities restored to their former glory in specially commissioned colour reconstructions, including several detailed fold-outs.With numerous diagrams, site plans, maps and a glossary, and now reissued in a slightly smaller format, Splendours of Ancient Greece is a panoramic study of one of the most important periods in human history.