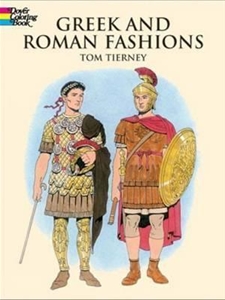 The classical lines of Greek and Roman fashions were as elegant as the art and architecture created by the artisans of these ancient Mediterranean civilizations. For his popular coloring-book series on the history of fashion, noted paper-doll illustrator Tom Tierney has carefully recreated a rich assortment of Greek and Roman clothing styles -- from garments worn by the nobility of Crete (2000-200 B.C.) to the apparel of a senator and his family in Rome's late imperial period (A.D. 300-487).
Also included are detailed, accurate portraits of Greek peasants in traditional clothing (1500-1000 B.C.), a Phrygian Amazon with shield and battle ax (ca. 1200-900 B.C.), Roman workers in simple tunics (ca. 750-300 B.C.), a Greek banquet guest and a dancing girl (ca. 500-400 B.C.), Roman gladiators wearing metal shoulder plates and chain mail (300 B.C.-A.D. 250), a Roman bride in a draped robe and veil (25 B.C.-A.D. 300 ), as well as Grecian and Roman hairstyles, headgear, footwear, and much more. Each plate is accompanied by fact-filled captions.