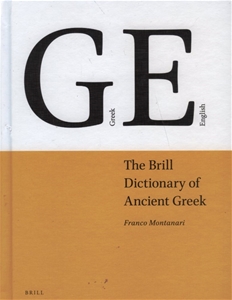 Winner of the 2016 Choice Outstanding Academic Title AwardThe Brill Dictionary of Ancient Greekis also available online and as a two-volume boxed set.The Brill Dictionary of Ancient Greekis the English translation of Franco Montanari'sVocabolario della Lingua Greca. With an established reputation as the most important modern dictionary for Ancient Greek, it brings together 140,000 headwords taken from the literature, papyri, inscriptions and other sources of the archaic period up to the 6th Century CE, and occasionally beyond.The Brill Dictionary of Ancient Greekis an invaluable companion for the study of Classics and Ancient Greek, for beginning students and advanced scholars alike. Translated and edited under the auspices of The Center for Hellenic Studies in Washington, DC,The Brill Dictionary of Ancient Greekis based on the completely revised 3rd Italian edition published in 2013 by Loescher Editore, Torino. Features -The principal parts of some 15,000 verbs are listed directly following the entry and its etymology. For each of these forms, the occurrence in the ancient texts has been certified. When found only once, the location is cited. -Nearly all entries include citations from the texts with careful mention of the source. -The dictionary is especially rich in personal names re-checked against the sources for the 3rd Italian edition, and in scientific terms, which have been categorized according to discipline. -Each entry has a clear structure and typography making it easy to navigate. "For a number of years now, scholars at ease in Italian have benefitted enormously from the riches, layout, concision, and accuracy of Professor Montanari'sVocabolario della Lingua Greca, with its added advantage of the inclusion of names. Hence classicists in general will welcome the English version of this very valuable resource." Professor Richard Janko,University of Michigan"Franco Montanari is a giant in our field, and his Dictionary is a major leap forward for us...." Professor Gregory Nagy,Harvard University