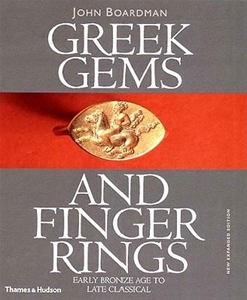 Greek Gems and Finger Rings is not a book about jewelry, merely; it's about history, archeology, art, and the origins of Western civilization. John Boardman makes a great case for why anyone interested in the ancient Greeks, and particularly their fine arts, should take a careful look at their gems and finger rings. Many if not most of the "gems" and "rings" discussed (and pictured in exquisite detail in the book) are actually seals used by the ancient Greeks (and Minoans) for various purposes: to seal and mark private personal correspondence and documents of state, to seal and identify containers and their goods in commerce. They were also used as heraldry. And yes, sometimes they were just jewelry. In Bronze Age Greece, these seals went from crude glyphs to gorgeous works of art in ivory, gold, precious stones. Some depict religious rituals and gods, scenes from mythology. Or they can depict hunting scenes with people and animals. Boardman takes you chronologically from Minoan/Mycenean to Archaic, Classical, and Hellenistic. He places the gems in cultural and historical context. He obviously has extensive knowledge of the prior literature on the subject, especially the archeological record and matters of provenance. Many of the gems in this book are artistic masterpieces to rival those of any Greek art. Boardman makes a case for them as miniature sculpture. To me they are more interesting than early Greek vase painting, which appears more frequently in books about ancient Greece than these seals, which are rarely shown. What particularly fascinated me was the clear differences in techniques, tastes, and styles from period to period. Comparing, say, the early Minoan and Mycenean seals to those of the Classical period yields some continuities, of course, but also much that is different, even in the way they portray the human (and also non-human) body. For example, the Minoans depicted people as wasp-waisted, with arm and leg joints very tapered, a total contrast to the Classical depictions, which are more realistic even within their idealizations. The Minoan bodies look more flexible, and their style captures a vibrant sense of animation, movement, life. The Classical gems are beautiful, but I found the Minoan gems more interesting. They are certainly more ecstatically alive. I might wonder to what extent the classical Greeks really believed in their gods, but in the case of the Minoan seals I must say they really convey a sense of pagan worship, showing rituals involving bare-chested women holding serpents, little gods materializing above altars. The Minoans and Myceneans are farther back in time than the Classical Greeks, and their art conveys that primordiality, a spirit and attitude towards existence that appear strange to us today as compared with the seals created in subsequent periods. We recognize the classical; its influence is all around us. But the Minoans seem alien, even in the way they dress. The book itself is large, sumptuous, and brimming with over a thousand detailed impressions and photographs. Well worth the price.