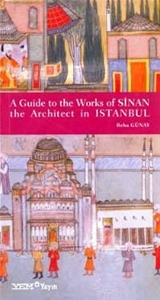 Guide to the Works of Sinan the Architect in İstanbul

Sinan was the architect who shaped classical Ottoman architecture in the 16th century. Istanbul is home to most of the finest buildings designed by Sinan, whose contribution to Ottoman’s cultural and architectural history is unsurpassed.
This book has been designed in the form of a guidebook to Sinan’s buildings in Istanbul, taking a route that begins at the heart of the old walled city. The city is devided into six separate sections, with maps at the beginning of each, so it simple to locate the buildings and see their relative positions to one another. In the course of an enjoyable tour through the most fascinating areas of the city you will see how Sinan’s creative genius set its mark on the development of Ottoman architecture and influenced his successors.