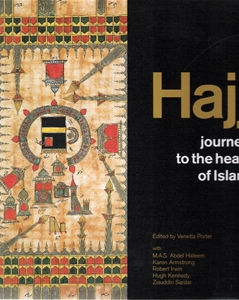 Hajj: Journey to the Heart of Islam

Proclaim the pilgrimage to all people. They will come on foot and on the backs of swift camels from distant corners of the earth. Quran, surat al-Hajj vs 27-30 It is a sacred duty for Muslims, wherever they may reside, to go at least once in their lives to Makkah, the heartland of Islam where the Prophet Muhammad received the revelation in AD 632. Drawing millions of pilgrims annually, the Hajj is a powerful bond that brings Muslims together from across the world. It takes place in the twelfth month of the Muslim year dhul hijja. Over the course of one week a number of specific rituals are performed which involve circumambulation of the Kaba, the cube-shaped building in the centre of the sanctuary at Makkah, and visiting key sites. The Kaba is believed to have been built by Abraham and his son Ishmael and was the focus of pilgrimage before the coming of Islam. Tracing the footsteps and personal experiences of pilgrims across the centuries, this fascinating book takes the reader on a physical and spiritual journey. The spirit of Hajj is further evoked through a wealth of illustrations, including personal objects carried by the pilgrims throughout the centuries; souvenirs collected along the route; early travel photographs; maps; manuscripts; wall paintings; compasses and astrolabes; textiles; and, contemporary artworks and images that capture the scale and emotional intensity of Hajj today.