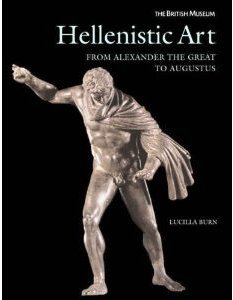 The Hellenistic Age was a new era of Greek civilization that began with the death of Alexander the Great in 323 B.C. and lasted until the Roman emperor Octavian defeated the last independent Hellenistic monarch, Cleopatra VII of Egypt, in 31 B.C. Burn traces the development of a distinctive new Hellenistic culture that was shaped both by artists who spread innovations across the Mediterranean region and by rival monarchs who commissioned luxury articles and sponsored elaborate city developments. This cross-pollination produced great diversity in artistic subjects, techniques, and materials.Alongside sculptures of mythic Greek figures appeared those of new gods, such as the Egyptian Serapis, as well as depictions of common people, such as fishermen and nursemaids. Artists produced works of widely varying sizes, from the colossal statue of Apollo at Rhodes to pocket-sized table decorations. Technical virtuosity flourished in the fields of pottery, glass, and jewelry. In this illuminating survey, Burn argues for a new appreciation of the advances and range of Hellenistic art and the influence it continued to exert on Mediterranean culture into the first centuries of the new millennium.