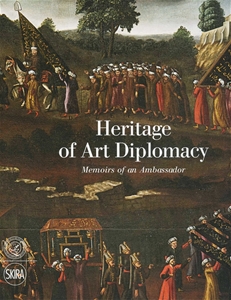 Heritage of Art Diplomacy Memoirs of an Ambassador

The volume presents for the first time four 17th-century paintings commissioned by the Habsburg Ambassador Hans-Ludwig von Kuefstein after his diplomatic mission to Istanbul, accompanied by twelve gouache works from a collection in Austria.

In spite of its diplomatic and political success in the Ottoman–Habsburg relations, the Kuefstein’s embassy is remembered first of all for its artistic legacy documented by the ambassador’s diary, the draft of a final report to the Emperor, diplomatic correspondence, a list of gifts presented and received, and last but not least, a series of gouaches, executed in Istanbul, and a series of oil paintings – which serve to illustrate various aspects of 17th-century Ottoman life, and provide a detailed account of the ambassador’s mission.

The Orientalist Museum of Qatar curatorial and conservation departments, with the assistance of external scientific experts, have embarked upon a collaborative project to provide new insights into the history of the Ottoman–Habsburg relations. The result is the exhibition and the volume Heritage of Art Diplomacy: Memoirs of an Ambassador – the culmination of two years’ restoration and research work aimed to provide a better understanding of the cultural heritage in respect to its aesthetic and historic significance and its physical integrity.