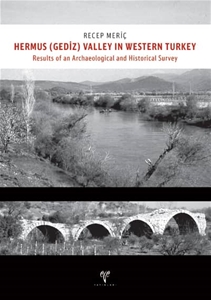 Hermus (Gediz) Valley in Western Turkey. Results of an Archaeological and Historical Survey

The importance of Gediz River, which has been inhabited since Neolithicum (6th Millenium B.C.) in 15 sites, had increased rapidly due to fertile lands and suitable communication routes with Aegean Islands and Interior Anatolia. The Gediz known Seha River Land by Hittites was ruled (ca.1300 B.C.) by vassal king Manapatarhunda appointed by Mursili II.

During the Iron Age, Gediz River was called Hermus. The valley connected Ionia, Aeolis and Lydia with each other. The Aeolic towns were generally small and fortified on high and rocky hill sites with isolated acropolis on the summit. Some newly discovered fortified settlements were connected with so far unknown Aeolic cities: Aegiroessa with Boztepe, Notium with Kumtepe and Killa with Asarlık Tepe. The central part of the Hermus valley was the land of Lydians with the capital Sardis. No other Lydian town was satisfactorily explored so far.

Clear traces of Lydian occupation were attested in Daldis, Akçapınar, Mersinli, and Kemaliye during recent research. The burial mounds i.e.tumuliwith tomb chambers built with delicately dressed limestone blocks were so popular in Lydia and hence compared with Egypt and called also Lydian pyramids. Some of them were investigated and recorded during the survey which were illicitly excavated by treasure hunters. Hermus enjoyed a high degree of prosperity under Attalids and Romans. The associations of professions are well developed and mentioned in inscriptions especially in the production of textile and leather. Numerous fortifications, monasteries and a summer residence at Nymphaeum were built during 13th century under the Lascarids. 12th and 13th centuries are characterized also by migrating Turcoman tribes into Byzantine territories.

The Emirate of Saruhan (1313-1410) continued the former stability in central Lydia. Manisa started to prosper as a capital of the Emirate. During Ottoman Period Manisa was a city governed by princes of the Sultanate. For that reason, Manisa is a typical Ottoman town adorned with numerous mosques, khans, Turkish baths and covered bazaars.

The fertile valley is still an extensive reservoir for the research on the past cultures not only with respect to material remains but also the continuity of cultures is still perceivable i.e. in the tradition of place names, agriculture, handicrafts and architecture, despite the evergrowing pressure of “modernity.”