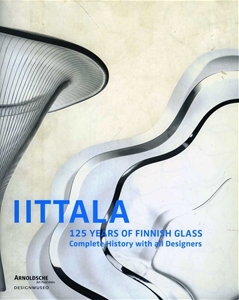 IITTALA 125 Years Of Finnish Glass Complete History With All Designers

The first Iittala competition was held in 1946 in order to promote innovation in engraved glass. It was won by the artists Tapio Wirkkala (1915-1985) and Kaj Franck (1911-1989), whom Iittala eventually employed as glass designers; Timo Sarpaneva (b. 1926) started working for Iittala in 1951. Both Wirkkala and Sarpaneva triumphed at the Milan Triennales in the 1950s, thus ensuring international acclaim for Finnish glass. Another cornerstone in the company's history was the famous Aalto vase which the legendary architect and designer Alvar Aalto (1898-1976) designed for Iittala. A survey of the most beautiful and interesting designs in glass - art glass objects as well as utility glass - by this leading Finnish glassworks, focusing chiefly on the 1950s and 1960s; including a complete catalogue with all glass designs by many famous designers.