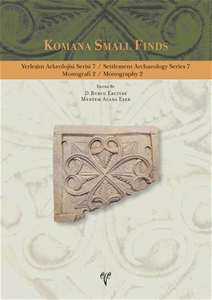 The aim of this book has been to collect papers on small finds recovered during the excavations at Komana between 2009 and 2018. It also marks the 10th year of excavations. Komana is a sanctuary site during the Hellenistic period, a place of worship for the kings as well as people from all over the country. It existed through the Roman and then the Byzantine period, was mentioned in the early Turkish written sources and reached the Turkish Republican period as a small rural village. The site is and was in a rural setting, surrounded by agricultural land along Yeşilırmak and its economy depended on agriculture throughout its history. The rural character was not a limitation for the site, on the contrary an attraction due to the wealth it generated. There are clear imports from the Aegean among the scarce finds from the Hellenistic period just like the wealthy finds from the Byzantine and Danishmend/Seljuk periods indicating contacts with Corinth, Byzantium, Cilicia, Iran, Egypt.