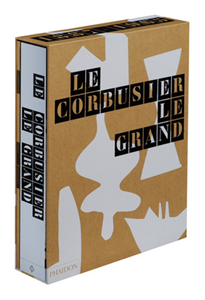 Le Corbusier Le Grand is an enormous and enormously appealing monograph on one of the greatest and most controversial visionaries of the twentieth century: Le Corbusier (1887-1965). Publisher Phaidon's super-sized volume features thousands of stunning photographs of the seminal architect, his buildings and plans, writings, and related documents (sketchbooks, personal snapshots, even postcards). With the turn of each page, readers can follow Corbusier's trajectory from revolutionary young artist and prolific writer to globe-trotting, celebrity-crusader for modern architecture and urban planning. Esteemed architectural historian and Corbusier expert Jean-Louis Cohen provides an elegant introductory essay to this veritable archive of images. We learn that although the Swiss-born Le Corbusier hailed from a small town in a small country under the modest name Charles-Edouard Jeanneret, he was destined for greatness--largely of his own design. A prime mover behind the International Style (perhaps the first truly global architectural-design language), Corbusier brought modern design principles and their promise of improved living standards to the world stage. Futuristic high rise apartment complexes, office towers, highly functional streamlined interiors and furniture made primarily of industrial materials may all be attributed in part to him and his controversial utopian mission to transform our daily lives into a highly functional and beautiful system. Le Corbusier Le Grand is an extravagant, yet essential tome for libraries, those interested in modernism, city planning, and especially those with a really big coffee table. --Lauren Nemroff