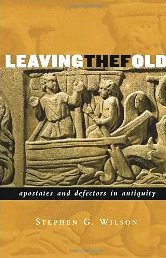 Leaving the Fold: Apostates and Defectors in Antiquity

Movement from one community to another can create strife, pain, and social dislocation. In this astute analysis, Stephen Wilson examines the ancient sources for clues to how leaving a religious group happened, what motivated defectors, and the different ways Jews, Christians, and pagans interpreted the event. As Wilson explains, ''by and large defection was a rancorous business and provoked extreme reactions, understandably so in the case of those who became traitors or who turned violently on their former community. But even the less dramatic instances were deeply troubling.