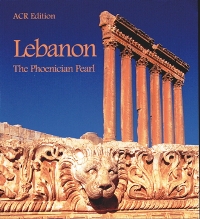 Lebanon is the daughter of the sea. The precious archives of Ugarit tell a terrible story, about when the entire universe suffered the violence of the gods. We learn that Yam, the God of the sea, and Baal, "prince of the Earth and rider of the clouds", hated each other with fury. Yam was killed, and the ancient power of the abysses fell with him. But the Phoenicians maintained their intimate relationship with she who would become their best ally.