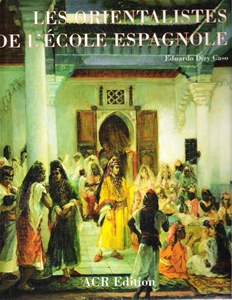 The term "0rientalism" refers to the manner in which Western artists expressed their vision of the Orient from the beginning of the 19th century. If each nation's particular historical relationship with the East influenced the way in which its artists represented this vision, that of the Spanish 0rientalits is unique owing to the special relationship that had long-existed between the Iberian Peninsula and the 0rient. In effect, for more than a thousand years a large portion of its southern territory (then known as Al-Andalus) was in intimate contact with the historical and cultural currents of the Orient, and in particular, the cultural influences of the Arabo-Islamic world. A detailed comparison of the work of the Spanish 0rientalists with that of other European artists of the same period also reveals certain similarities. The reason for this can be found in the common bonds which united them to this movement, particularly in France and Italy. The present work offers an exhaustive compilation of the works and biographies of the Spanish 0rientalists; its purpose is to introduce the reader to a fascinating and little-known chapter in the history of Spanish painting.