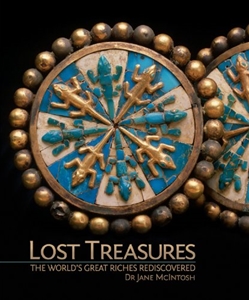 From the earliest known records, history abounds with accounts of glorious treasure hoards hidden in caves or buried for safe-keeping; of ships wrecked with their precious cargoes still on board; of distant and obscure regions where gold and riches are traded as common currency. While many of these tales can be put down to myth and rumour, numerous finds down the centuries have been nothing short of incredible, and there is strong evidence of other hordes that are still out there somewhere waiting to be found. "Lost Treasures" recounts the fascinating stories behind the quest for the world's lost fortunes. Fully illustrated and containing detailed location maps, the book sets out to chart, continent by continent and ocean by ocean, the original history of the treasure's deposition. The result is a compelling trawl through history - one that will prove irresistible to professional archaeologists and amateur treasure-hunters alike, as well as anyone who has ever been captivated by the thought of hidden treasure. Written by an experienced archaeologist and illustrated with beautiful pictures of stunning finds, "Lost Treasures" is a fascinating journey through time and around the world in search of riches in all their different forms.