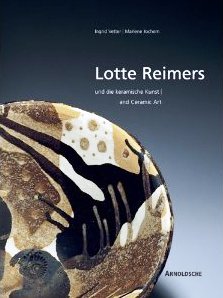 Lotte Reimers' joining forces with Jakob Wilhelm Hinder and the extensive ceramics exhibition with which he was touring West German cities in 1951 marks the onset of her passion for this craft. Committed to making the public aware of ceramics as art, Hinder and Reimers ended their tour at Deidesheim in 1961. Lotte Reimers' creative approach to managing the Deidesheim ceramics museum and gallery has received critical and popular acclaim both at home and abroad. Acquired by the state in 1993, the Deidesheim museum collection is now known as the Hinder/Reimers Collection of the State of Rhineland-Palatinate. Lotte Reimers embarked on a career of her own as an art ceramist in 1965. While running the museum and gallery, she has been adding to her impressive oeuvre for nearly forty years.