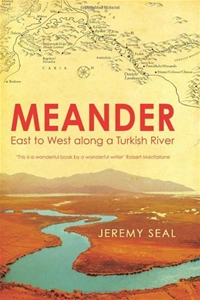 The Meander River runs through a long fertile valley in western Turkey, in the region of Anatolia. The valley produces a great number of fruits and vegetables, including tree fruits, as well as nuts and grains. The rocky hillsides are dotted with olive groves, and the river and lakes once teemed with fish. Little wonder then that over many millennia various groups of people have invaded and settled in the area. The Meander valley has also been a fault line in the battles between European and near Eastern powers: ancient Greeks and Persians, Christendom and the Saracens, Byzantium and the Ottomans, modern Greeks and Turks. Religion has also been the cause of violence and conquest here. The region once worshipped the Hittite fertility goddess, then Apollo the sun god, Christianity was brought by St Paul (a native of this region), then quickly eclipsed by the rise of Islam. When Turkey became a republic in 1923, the new regime imposed a secular constitution, but in recent years Islam has had a moderate resurgence in politics, and tourists have returned to engage in sun worship. The head of the Meander is only a little over 500 kilometres from its outlet into the Aegean Sea, and it falls by about one kilometre in elevation, but it is notorious for the long and winding road it takes to reach its final destination. The verb `to meander' in English means to wander in a circuitous way, often with the connotation of doing so aimlessly, and this meaning derives directly from the course of this river. Jeremy Seal has a long-standing interest in Turkey and is fluent in the language. His previous book, A Fez of the Heart (1996), was an affectionate account of the country and its people so I was pleased to see that he had written a new travel story.