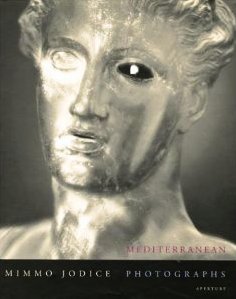 Mimmo Jodice, one of Italy's finest photographers, has set out like a modern Odysseus on an epic journey that he describes as "a voyage in search of the past." The result, Mediterranean, is Jodice's most personal and significant undertaking to date. Not content merely to document archaeological sites and artifacts, Jodice has aimed to rediscover a sense of the Classical universe, presenting it in a vivid and original way.

From Italy, France, Spain, Greece, Macedonia, Turkey, Tunisia, Syria, and Jordan, Jodice's luminous photographs evoke a vision of Mediterranean civilization that is a conflation of history and mythology. His dramatic yet ethereal images refuse both classical and contemporary boundaries in a fusion of the topographical and the intimate. Ruined temples, lost cities, heroic landscapes, gods and goddesses, vistas of Vesuvius and of the omnipresent sea transcend the constraints of their historical context in terms of both time and space.

At the same time, Mimmo Jodice's artful darkroom interventions give these images a renewed energy, one that is born of the present material world, but which seems sustained by loftier, more elusive mysteries. He begins with black-and-white negatives, and then works in the darkroom to create the simultaneous presence of a multiplicity of tones. Jodice's treatment of the photographic paper gives the images a suggestion of movement-- they vibrate with the sense, as he puts it, that "everything is fleeting and somewhat impregnable."

Jodice's deeply original work reveals not only an experimental creative process, but also an informed and unique vision addressing a subject matter-- archaeology-- that has never before been considered in this way. His particular interpretations of such Classical icons remind of the continuing impact of the Mediterranean world on our present lives, and reinstill a sense of epic, of adventure, of wonder, and even of providence-- all so often missing in contemporary culture. Jodice provides us with a vision of the Mediterranean that is rich and vast, letting symbolic images become links between the experience of diverse peoples and between ourselves and our distant ancestors.

"This collection of images implies the destiny of a nomad. We accompany Jodice into his chosen places, on both the northern and southern shores of the Mediterranean. The camera follows paths that we thought we understood, showing us what we never perceived."--Predrag Matvejevic

"...Looking at these places, almost always the camera chooses a center with radiating shafts or strata of stone that move from a white center out into a dark, irregular periphery, a shimmering sight that is perhaps equivalent to echoing music or the shouts of invisible nymphs."--George Hersey