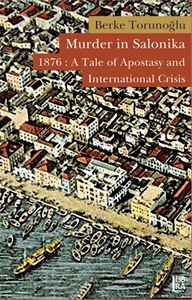 Murder in Salonika 1876: A Tale of Apostasy and International Crisis

It all happened in 1876, during “the Year of the Three Sultans” when a Bulgarian girl named Stephana made a journey to Salonika to convert to Islam and was subsequently abducted by a group of Christians. This event stoked tensions, and stirred outrage within the Muslim community. Public protests ensued, culminating in the murder of the French and German consuls by a Muslim mob on May 6, 1876. This ‘Salonika Incident’ would consequently trigger a wave of hysteria throughout the West and among the Christian populations of the Ottoman Empire. There was fear of an ‘impending massacre of the Christians’ which would never take place. A diplomatic war of words between the Sublime Porte and the Great Powers, which held the former accountable for this double crime, directly followed the incident.

Through a detailed and meticulous account of this neglected episode of Ottoman-Balkan history, this book aims to cast light on an often distorted and highly misunderstood event which is a manifestation of Western attitudes toward the Ottoman Empire during the climactic years of the Eastern Question.