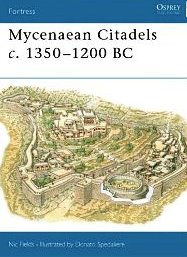 Mycenaean society was constantly geared for battle and invasion. Their ‘cities’ were heavy fortresses with unimaginably thick perimeter walls. Legendary sites such as Mycenae, Tiryns, Argos, Krisa, the Athenian Acropolis and Gla are all representative of their fortified citadels that dominated the Greek countryside for some 300 years until their sudden decline and abandonment around 1100 BC. This title describes the golden age of these fortifications; it details how these formidable structures were constructed and extended, as well as revealing the elaborate palace complexes built by the great Mycenaean warlords immortalised in the verses of Homer’s Iliad.